+
Description
Delivery
Returns
Thomas the Tank Engine and his friends are extremely popular and well-known names to children around the world, but did you know that the original book that started the locomotive phenomenon did not feature Thomas at all? ‘The Three Railway Engines’ was the very first of the Rev. W. Awdry’s ‘Railway Series’ and was published in 1945.

The book introduces engines Edward, Gordon, and Henry who all have to learn that it is better to be friends than argue amongst each other. This personalised version of ‘The Three Railway Engines’ is a great way to introduce children to the world of Thomas the Tank Engine, and for anyone who is already a fan of the series who can reacquaint themselves with the book that started it all.

This edition is personalised with the child’s name on the front cover, as well as appearing on the top of every page. A personalised message can also be added to the opening page of the book. To make this gift extra special, the book is presented in a free gift box that has a special Thomas the Tank Engine logo embossed in silver foil on the lid.

A lovely bespoke keepsake book for any fan of the Thomas the Tank Engine series!

This products has not been reviewed yet. Be the first to review it

We hope you are completely happy with your purchase but if you're not, it's really easy to return items to us.

Just e-mail to let us know (orders@borngifted.co.uk) within 14 days of delivery with your order number and reason for return and we will send you instructions.


Further information can be found in our Returns Policy here: https://www.borngifted.co.uk/shop/tsandcs.

Please note that exceptions do apply to items that have been personalised to order.


This item will be posted within 2 working days.
***PLEASE NOTE THAT DUE TO CURRENT UNAVOIDABLE SOCIAL DISTANCING POLICIES IN OUR WAREHOUSE, THERE MAY BE AN EXTRA 3 DAYS DELAY ON THE USUAL DESPATCH TIMES - APOLOGIES FOR ANY INCONVENIENCE CAUSED*** 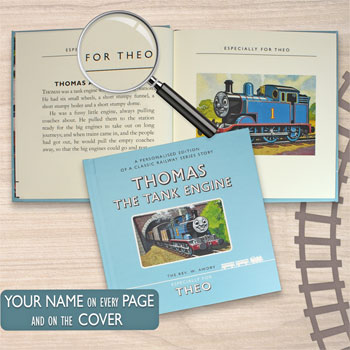